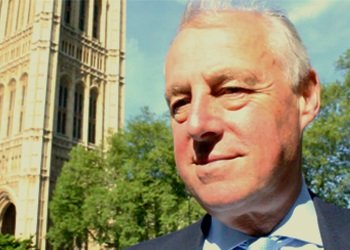 Conservative MP Tim Yeo has dismissed allegations he had coached the managing director of a company before the businessman appeared in front of the Energy and Climate Change Select Committee which he chairs.

He denied the claims made by the Sunday Times that he used his position to help business clients saying he “totally rejects these allegations”. The paper said its undercover reporters posed as representatives of a fictitious South Korean solar energy company offering to hire Mr Yeo at £7,000 a day to back new laws to boost their business.

Last month the MP excused himself from questioning GB Railfreight’s Managing Director John Smith because of his conflict of interest as a non-executive director and shareholder in its parent firm Eurotunnel.

In a video recording released by the Sunday Times, he said: “We had a company called Great British Rail Freight who have big contracts for moving coal and biomass around the country. And I said, because GB Rail Freight is a subsidiary of Eurotunnel, I could not ask this guy any questions in public because it would look as though I might be biased about that. But what I do for him in private is another matter altogether, obviously.”

He added: “I was able to tell him in advance what he should say.”

The former environment minister issued a statement shortly after he pulled out of interviews on Sky News and BBC1.

He said: “The Sunday Times has chosen to quote very selectively from a recording obtained clandestinely during a conversation of nearly an hour and a half in a restaurant with two undercover reporters who purported to be representing a client from South Korea. My lawyer requested the whole recording from which these extracts were obtained but this has not been given.

“The whole recording would show the context of the conversation and demonstrate clearly that at no stage did I agree or offer to work for the fictitious company these undercover reporters claimed to be representing, still less did I commit to doing so for a day a month as the article claims.”

The MP said he was initially requested to establish an All Party Parliamentary Group to help their client and was then asked to give the names of MPs who would be interested in joining such a group, both of which he claims to have refused.

Mr Yeo said he sent an e-mail the day after explaining he couldn’t work for their client “because it had become increasingly apparent that they wanted a lobbyist and that role was incompatible” with his wok as an MP and Committee Chair.

He said the allegations against him is “totally untrue” and he had only met Mr Smith five days before he gave evidence during a visit to one of the firm’s freight trains.

The MP said: “I spoke briefly to Mr Smith about his forthcoming appearance in front of the Committee to explain that because of the business connection between us I would not take part in questioning him. I did not want him to think that my silence indicated a lack of interest in what he was saying.”

He added: “I did not ‘coach’ John Smith on this or any other occasion. He is not a ‘paying client’ as the Sunday Times alleges but a business colleague. Like many business executives giving evidence to Select Committees he sought advice from the public affairs company retained for the purpose by GB Rail Freight.”

Mr Yeo said he is referring to the Parliamentary Standards Commissioner to have the incident thoroughly investigated by an independent body and is the latest in a series of MPs caught up in lobbying stings.