Shale gas firm ramps up with Arup as environmental assessor

UK shale gas driller Cuadrilla Resources is ramping up its activity by appointing engineering firm Arup to run its Environmental Impact Assessments. Cuadrilla is one of two currently exploring in […] 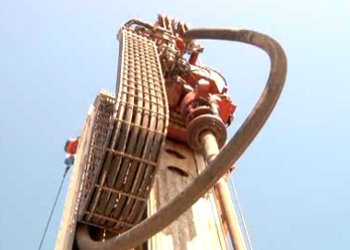 Cuadrilla is one of two currently exploring in the UK (their drilling rig, pictured) and this marks a surge in development for the firm’s hopes in the UK as yesterday British Gas owner Centrica announced it is taking a small stake in the drilling licences.

Francis Egan, chief executive of shale gas firm said the EIAs are being carried out as part of a process to win “informed consent” for its fracking in the Lancashire Bowland shale.

The process will kick off this summer and is expected to run into the start of 2014.

Des Correia, project director at Arup said: “Shale gas exploration is an emerging area in the UK and Arup understands the full range of environmental issues. However, the vital element in this work will be using that knowledge to ensure we fully assess, explain and, as appropriate, mitigate any implications for the local environment or communities.”

Local opposition to Cuadrilla’s plans has grown ever since its fracking activity was linked to the small earthquake which rocked Blackpool in 2011. A poll of 284 local residents conducted last Autumn by the parish council in Balcombe, near a site where Cuadrilla plans to drill, found 82% were opposed to fracking.

Out of those opposed to fracking, 125 mentioned their concerns and the biggest worry was over an increase in road traffic through the village, followed by pollution of water supplies and the impact on the environment.