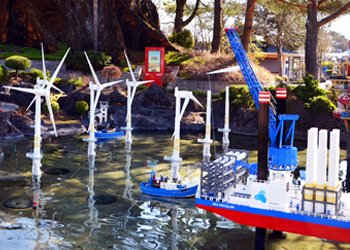 Seven wind turbines with rotating blades are being built in Denmark’s LEGOLAND, a miniature version of one of DONG Energy’s offshore wind farms.

The Anholt offshore wind farm in Kattegat, which is set to become Denmark’ largest upon completion in August, consists of 111 turbines, with a total capacity of 400MW – capable of powering around 400,000 Danish homes.

Together with LEGOLAND, DONG Energy has built an area in Miniland called ‘Energy in Denmark’, where families have the chance to get an overview of Denmark’s energy path – past, current and future energy sources.

Sanne Troldborg, Event Co-ordinator at DONG Energy said: “Playing and learning go hand in hand just like wind and wind turbines. If we can teach our children about energy through playing, it will hopefully excite some of the children and create a better understanding and sense of what energy actually is.”

Families already have the chance to explore energy generated by the offshore wind farm as the area provides up-to-date information on the Anholt wind project in addition to explaining why offshore wind turbines are more efficient than onshore ones.

Earlier this year the world’s largest offshore wind farm in the Thames Estuary – in which DONG Energy has the majority stake – started generating clean electricity after all 175 turbines were installed.