Google has launched a fleet of high altitude solar-powered balloons (pictured) capable of delivering internet access at 3G speeds to specialised antennas on the ground below. Called Project Loon, the […] 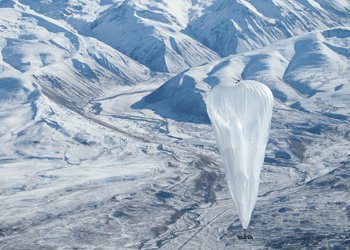 Google has launched a fleet of high altitude solar-powered balloons (pictured) capable of delivering internet access at 3G speeds to specialised antennas on the ground below.

Called Project Loon, the idea was developed by the search engine giant’s secretive Google [x] laboratory and is part of the company’s wider strategy of exploring new ways of delivering connectivity to remote or disaster-stricken areas.

The balloons are carried around by the wind and people can connect to their network using a special internet antenna attached to their building. Each unit’s electronics are powered by solar panels, which produce 100 watts of power – enough to keep it running while also charging a battery for use at night. By moving with the wind and charging in the sun, they are able to power using only renewable energy sources.

Google launched 30 balloons in the Canterbury area of New Zealand last week which is expected to deliver internet connectivity, with plan to set up pilots in other countries.

Project Leader Mike Cassidy said: “We believe that it might actually be possible to build a ring of balloons, flying around the globe on the stratospheric winds, that provides Internet access to the earth below. It’s very early days, but we’ve built a system that uses balloons, carried by the wind at altitudes twice as high as commercial planes, to beam Internet access to the ground at speeds similar to today’s 3G networks or faster.

“The idea may sound a bit crazy—and that’s part of the reason we’re calling it Project Loon — but there’s solid science behind it.”

Currently only specialised fixed antennas can connect to the balloons but Google aims to expand the scheme to mobile technology.