The largest bio-refinery in the UK was opened in Hull today by Business Secretary Vince Cable. The Vivergo plant will produce 420 million litres of bioethanol a year at full […] 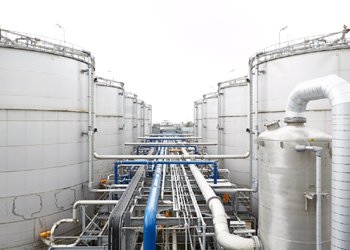 The largest bio-refinery in the UK was opened in Hull today by Business Secretary Vince Cable.

The Vivergo plant will produce 420 million litres of bioethanol a year at full capacity – which is roughly the same as a third of the UK’s current demand.

Bioethanol is a renewable transport fuel which is added to petrol and is made from animal feed-grade wheat. The wheat is fermented in eight tanks (pictured) and this part of the process is similar to that of a typical brewery.

Based on a brownfield site near the Humber River, Vivergo will use 1.1 million tonnes of UK feed-grade wheat to make bioethanol as well as 500,000 tonnes of animal feed products.

David Richards, Managing Director of Vivergo, said: “Our location right on the Humber is ideal; we’re at the heart of the UK’s wheat belt which offers some of the best yields in the world and our channels for distributing the bioethanol either by ship or by road to depots where it is blended with petrol, are second to none.”

At the launch, the Business Secretary declared energy is “critical” for the UK’s growth prospects.

Mr Cable said: “Vivergo is a good example of how joint ventures, using the financial support and expertise of big companies, can not only create local jobs but also help meet the energy security and fuel demands of our country and support local farmers.”