Energy Secretary Ed Davey confirmed again his backing for fracking by declaring “I love shale gas” today. Speaking at a reception for the all party parliamentary group for unconventional oil […] 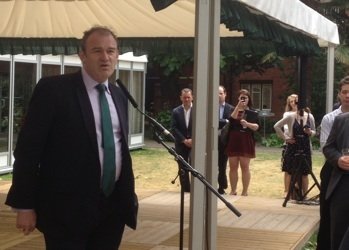 Speaking at a reception for the all party parliamentary group for unconventional oil and gas which has formed in the last year, the minister described a “whole government effort” to exploit shale gas in the UK.

Although early stages for any industry, recent developments including Centrica buying a stake in a license for drilling have seen the excitement around shale gas grow apace.

The Lib Dem MP told the attendees: “The potential for shale gas is fantastic for our energy security… and the climate”.

He also focused on the economic benefits from exploiting the fossil fuel, quipping: “I think the Chancellor might also have noticed the tax revenues.”

The 14th licensing round for onshore drilling is coming closer and there might be “quite a lot of interest in that”, he added with a wry smile.

Earlier at the event Dan Byles, chair of the APPG on unconventional oil and gas said the group isn’t necessarily “pro-shale gas” and would “lift up stones and look under them”.

He told ELN afterwards he wasn’t expecting the group to become a “cheerleader” for shale oil and gas, adding he had invited anti-fracking MPs such as Tessa Munt to join the group as well as environmentalists such as WWF and Greenpeace.