Activists scale the Shard to show up Shell 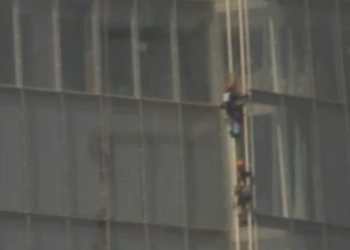 It’s the sort of stunt you’d expect James Bond to be involved in – but six activists have scaled the Shard in London in protest against Shell’s drilling plans in the Arctic.

Starting around dawn, the six women from Greenpeace had reached the 100m mark – nearly a third of the way up the iconic skyscraper – by around 11am. The climb is being streamed live online and more than 10,000 people have tuned in to watch.

The campaign group says it targeted the building because it “sits slap bang in the middle of Shell’s three London headquarters. They don’t want us talking about their plan to drill in the Arctic. We’re here to shout about it from the rooftops.”

Greenpeace says the women went through “intensive” training before the escapade which has attracted huge interest online.

Hundreds tweeted about the so-called “ice climb” and one user called SupermanTweets even joked: “I’ll be around… Just in case.” Greenpeace replied: “Thanks but we’ve got it covered.”

The oil firm itself tried to be as neutral as possible in its response to the shenanigans.