Stagecoach has cut the carbon footprint for all of its bus and rail operations in the UK, USA and Canada by 6% in the last three years. The public transport […] 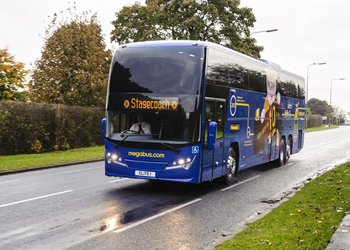 Stagecoach has cut the carbon footprint for all of its bus and rail operations in the UK, USA and Canada by 6% in the last three years.

The public transport firm touted the saving for its 13,000 buses, coaches, trains and trams which are used by around three million passengers a day. It owns East Midlands and South West Trains and runs budget coach firm Megabus.

Between 1 May 2010 and 30 April 2013 Stagecoach also slashed the carbon intensity (the tonnes of CO2 equivalent emitted per million pounds of turnover) by 8.6%.

Part of the firm’s success has come from an eco-driving system installed in around 7,000 buses which is expected to cut its fuel use by 4%. Drivers can earn “green points” which can count towards yearly bonuses from a potential £900,000 pot.

Hybrid buses have helped too according to Stagecoach which has around 240 hybrid electric buses in service across the UK, which emit a third (30%) less carbon than standard vehicles.

Martin Griffiths, Stagecoach’s group chief executive said: “I’m particularly proud of the way our frontline employees in the UK and North America have taken up the challenge to deliver greener, smarter working.”

The firm also pointed to the automatic lights it uses at some bus depots and railway stations which have movement sensors to detect when people are at the stations, improved energy management systems at offices and depots and a £2.2 million investment at South West Trains on a braking project to save energy on more than 200 trains.

Recycling efforts have jumped with new contracts for waste and recycling at East Midlands Trains, says the group, claiming the recycling rate at stations has reached more than 70%.

Stagecoach is working on new five-year Group sustainability strategy. Mr Griffiths added: “We are determined to do more to minimise our impact on the environment and help our customers to have a greener way of living.”

The firm has just won a Carbon Trust Standard for measuring, managing and reducing its global carbon footprint, although this excluded Stagecoach’s operation of Virgin Trains because it is a minority shareholder, owning 49%.

Michael Gifford, Associate Director at the Carbon Trust said: “By achieving independent certification of real reductions in greenhouse gas emissions around the world, Stagecoach is showing leadership in taking action to manage its environmental impact. It proves to stakeholders and customers that commitment to cutting carbon has resulted in real savings.”