Royal Dutch Shell has unveiled plans to boost production with two new deepwater projects in Brazil. Working alongside its partners, it aims to go ahead with the projects at Parque […] 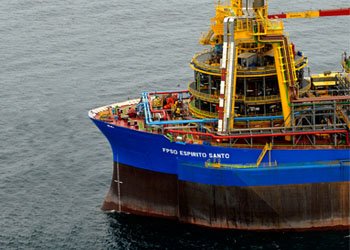 Working alongside its partners, it aims to go ahead with the projects at Parque das Conchas and the Bijupira/Salema fields.

For the first field, they have decided to move forward with Phase 3 of the project which will include the installation of subsea infrastructure at the Massa and Argonauta O-South fields. The fields will be tied back to its floating, production, storage and offloading vessel (pictured). The project is expected to reach a peak production of 28,000 barrels of oil equivalent per day (boe).

The Bijupira/Salema fields, which will include the drilling of four new production wells, are expected to boost production to a peak of 35,000 of boe per day in 2014. They have produced close to 100 million boe since start-up in 2003.

John Hollowell, Executive Vice President for Deep Water, Shell Upstream Americas said: “Offshore Brazil is a key part of our plans to grow our deepwater portfolio – a key component of our global strategy. We look forward to continuing the work with our partners in offshore Brazil to develop the resources in a safe and responsible way.”

Earlier this month Greenpeace UK activists scaled up London’s Shard in protest against Shell drilling in the Arctic.