Fracking firm Cuadrilla has denied rumours it has postponed plans to drill at the Balcombe site in Sussex as protest against the company continues. Six people have so far been […] 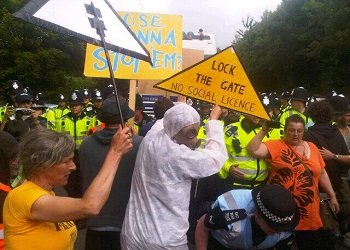 Fracking firm Cuadrilla has denied rumours it has postponed plans to drill at the Balcombe site in Sussex as protest against the company continues.

Six people have so far been arrested today as they tried to prevent trucks with equipment from going into the site – bringing the total to 23 since Friday morning.

Banners reading “Frack Off”, “Lock the Gate”, “Sussex says No to Fracking” and “Free Hugs” were displayed as police tried to stop around 100 protesters from blocking the road.

Superintendent Steve Whitton said: “We understand how strongly some people feel about the issue of fracking but it is important that they work with us to protest safely and peacefully. It is a difficult balance for police – to support an absolute legitimate right for people to protest peacefully and also uphold the legal right of the company to operate. We will do all we can to keep that balance right.

“If protestors block the way and it is lawful for the company to operate then they need to move. If they are repeatedly asked to move and at times are putting their own safety at risk, some level of coersion has to be used. There are a range of tactics that officers are trained to use and the use of pressure points is one that is proportionate and uses the minimum of force necessary.”

Anna Dart, a member of the community told ELN most protesters camped overnight and villagers showed their support and supplied biscuits and drinks for all. She claimed they are holding a “peaceful protest” and will continue it “as long as they have to” as they have no plans to back down.

A Cuadrilla spokesperson also told ELN rumours about the firm postponing its fracking plans following the protest is “completely wrong”. Although the incident has delayed their plans slightly, the firm said it will start drilling “as soon as possible” in line with the environmental permits it has received.