A 500MW offshore wind farm – the second largest in the world after the London Array in the Thames Estuary – has officially been opened today. Located 23 kilometre off […] 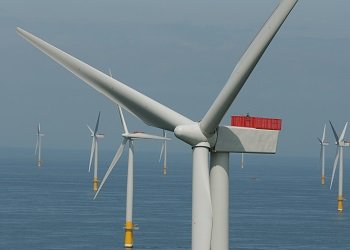 A 500MW offshore wind farm – the second largest in the world after the London Array in the Thames Estuary – has officially been opened today.

Located 23 kilometre off the coast of Suffolk, the £1.3 billion Great Gabbard project has 140 wind turbines, which is expected to generate enough clean electricity to power 530,000 households – more than the domestic electricity demand of the whole of Suffolk.

Around 100 new jobs were also created at the operations and maintenance base for the project – expected to double in size when an extension, called Galloper, is completed in 2017.

Energy Minister Michael Fallon, who was present at the opening ceremony said: “The UK leads the world in offshore wind power generation with more capacity than the rest of the world combined and we want to see this sector grow even further. This sector is an engine of our economy. By the end of this decade, tens of thousands of additional jobs could be created in the supply-chain for offshore wind throughout the UK.”

He added the project has also benefitted local business Seajacks: “[It is] building the world’s largest and most advanced offshore wind farm installation vessel to transport turbines out to this great wind farm.”

Construction of the Great Gabbard – which is owned and developed by SSE and RWE npower renewables, the UK subsidiary of RWE Innogy – started in 2008 and was completed in September last year.

According to statistics from DECC, offshore wind has the potential to provide clean energy to 11 million households in the UK by 2020, creating 30,000 jobs and contributing £7 billion to the economy.