Electric vehicles are going underground – almost, as sixty new charging points for electric cars have just been installed at 12 tube stations around London. They are built in the […] 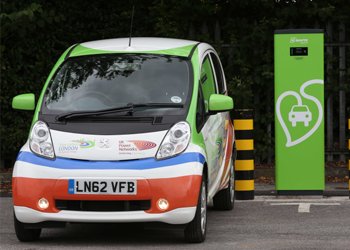 Electric vehicles are going underground – almost, as sixty new charging points for electric cars have just been installed at 12 tube stations around London.

They are built in the car parks of stations on the outskirts of the capital, such as High Barnet on the Northern line, Stanmore on the Jubilee and the Victoria line’s Blackhorse Road.

Stations on the Metropolitan, Piccadilly and Central lines also have charge points.

The new posts can charge two cars at the same time, either in fast (7kw) or rapid (22kw) mode and are accessible through the Source London charging network.

Transport for London (TfL) said they will be a quick charging option for EV drivers.

Graeme Craig, Director of Commercial Development at TfL said: “This is the first bulk installation of rapid electric vehicle charge points in London and will allow drivers using the points to give their cars a full charge in just one hour.”

Their use will be logged by researchers who are studying the habits of London EV drivers including the time of day vehicles are charged, for how long, where they are charged and the amount of electricity transferred.

The aim is to work out how electric cars can be spread across the capital without overloading the electricity network.

Michael Clark, Low Carbon London programme director for UK Power Networks which installed the charge spots said: “We are exploring ‘smart’ solutions to manage those peaks, without incurring the cost and disruption of digging up the road to lay new cables, supporting take-up of low carbon technologies which can deliver cleaner air for the capital.”