A new 54MW power plant which is claimed to have taken a “record 23 days” to construct has been inaugurated in Yemen. Located in the province of Aden, it is […] 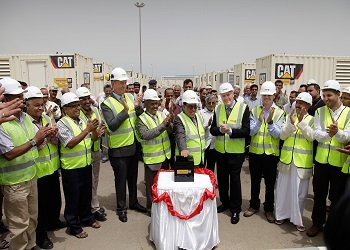 A new 54MW power plant which is claimed to have taken a “record 23 days” to construct has been inaugurated in Yemen.

Located in the province of Aden, it is expected to generate enough energy to power around 150,000 homes – or provide up to 15% of the province’s summer electricity demand.

The project, built by Altaaqa Global, is expected to help tackle power outages in the country and Governor Wahid Ali Rashid appealed to people in Aden to “use the electricity wisely and be efficient in consuming energy” in order to avoid power cuts.

Khalil Abdul-Malik, Director General of Public Electricity Corporation (PEC) said: “This is the fastest power plant ever built in the history of Yemen. It only took us 23 days from the day that we have signed the contract until the day that we have supplied electricity. This is a record breaking power project… This power plant will alleviate the suffering of the citizens due to power outages and reduce the power deficit.”

Earlier this year a heat wave across most parts of north and western India led to power cuts and water shortages in the country.