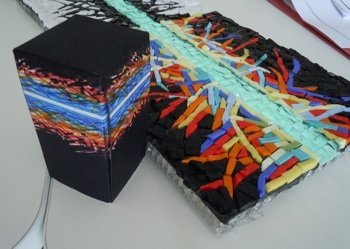 The art world is set to embrace energy once more – following in the footsteps of retired Bankside power station (or Tate Modern to you and me) an electricity substation in East London is to become a contemporary artwork.

Artist Gary Drostle – whose mosaic-based art has won an international architectural award – has designed ‘Electron Flow’ to represent a spark of electricity encircling the building.

The design (pictured) will have an electroluminescent strip which lights up at night, surrounded by a rainbow-coloured mosaic.

The mosaic will be created by Drostle with help from the local community later this year.

He said: “Electricity was the theme so I looked at the movement of electricity. I wanted to get back to the basic idea of electrons flowing around the whole building using multi-coloured mosaic tiles to represent the physical spectrum of light, with a band of light giving it extra life when it gets dark.

“The design represents the flow of electrons along a circuit and the connection to the visual world through the electromagnetic emission of light,” he added.

Marcel Baettig, founder of Bow Arts, the local arts organisation commissioned by housing association Poplar HARCA to work on the project said: “We wanted to turn a large blank canvas into an interesting public building. We could have gone with ideas that masked the substation, but electricity is an important part of the modern age so we decided to do something brave.”

The substation is owned and operated by UK Power Networks.