The MP and former Green Party leader Caroline Lucas has been arrested among other activists during an anti-fracking protest in West Sussex. Around 200-300 protesters are believed to have gathered […] 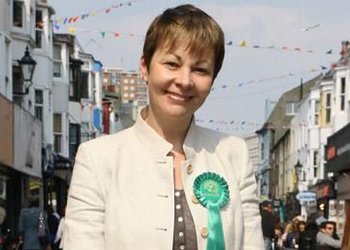 The MP and former Green Party leader Caroline Lucas has been arrested among other activists during an anti-fracking protest in West Sussex.

Around 200-300 protesters are believed to have gathered at Balcombe today, outside fracking firm Cuadrilla’s drilling site and 25 protesters were arrested by 3:30pm this afternoon, for offences including “assault and obstruction of the highway”. A number of them locked arms and chained bicycles together in an attempt to block the road, resulting in traffic jams.

In a statement issued after her arrest, the MP said she joined the protest because the Government has “completely ignored” the views of the public on fracking for shale oil and gas.

The Green MP said: “The evidence is clear that fracking undermines efforts to tackle the climate crisis and poses potential risks to the local environment… I’m in the privileged position of being able to put questions to the Government directly and arrange debates in Parliament but still ministers have refused to listen.”

She added: “Despite the opposition to fracking being abundantly clear the Government has completely ignored the views of those they are supposed to represent. When the democratic deficit is so enormous, people are left with very little option but to take peaceful, non-violent direct action.”

The protesters were warned they would be arrested if they didn’t clear the road.

Superintendent Lawrence Hobbs from Sussex Police said: “We had been expecting some form of direct action today and we had officers in place ready to deal with it. It has been necessary to close the road but that has been done a number of times in recent days to ensure that safety of all those who are taking part.

“As we have said from the very start of this protest operation, we are more than happy to facilitate peaceful protest but those who are intent on criminal action will be arrested.”

More than 400 officers were deployed today with officers drafted in from ten other forces from around the UK.

The news comes after some protesters broke into Cuadrilla’s Lichfield office, chained themselves to filing cabinets and also superglued their hands to the doors of the PR firm Bell Pottinger who are representing the energy company.

Cuadrilla, which has temporarily halted its oil drilling operations at Balcombe, said it “condemns all illegal direct actions against our people and operations”.