Biomass loopholes ‘big enough to drive a logging truck through’

Green campaigners have attacked the revised sustainability criteria for the UK’s burgeoning biomass electricity industry. The Department of Energy and Climate and Change (DECC) says its “tough” new demands will […] 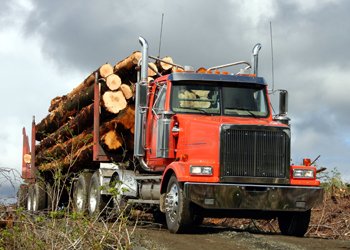 The Department of Energy and Climate and Change (DECC) says its “tough” new demands will mean biomass-fuelled generators must hit targets on how much carbon is emitted and whether enough trees have been replanted, with rules kicking in from April 2015.

But the new rules have taken flak from several environmental groups.

Biofuelwatch claimed most of the carbon emissions from biomass will be ignored because DECC’s sustainability criteria exclude things like ‘substiution’ emissions – the carbon cost of burning biomass which could have had other uses.

The group said DECC relies on a number of “dubious” schemes to certify sustainability and described the Ofgem carbon calculator they use to tot up greenhouse emissions as “deeply flawed”.

A spokesman for Biofuelwatch, Duncan Law said: “DECC is more concerned with ‘keeping the lights on’ using existing technology than with real carbon savings and environmental impact. It is heavily lobbied by the energy companies who stand to make hundreds of millions from burning hundreds of millions of tonnes of imported wood.”

Greenpeace also attacked DECC’s failure to mention ‘carbon debt’. They quoted a report by the European Environment Agency which found that burning biomass can be actually be a high carbon source of energy if forests aren’t re-grown to pay the ‘carbon debt’ back.

Dr Doug Parr, the Chief Scientist at Greepeace said: “The loopholes in these sustainability standards are big enough to drive a logging truck through. Having learnt nothing from the biofuels debacle, the Government has ignored the latest scientific research and produced standards that will take a potentially sustainable industry and transform it into one more way to greenwash environmental destruction.”

But the Renewable Energy Association (REA) said these arguments are based on worst-case scenarios involving the burning of whole trees and unsustainable forest management, when the industry mainly relies on cheaper leftovers.

REA Chief Executive Dr Nina Skorupska said: “These sustainability criteria ensure that the UK can reap the benefits of biomass, safe in the knowledge that it is making a real dent in our carbon emissions and that ecologically sensitive land is being protected.”