Scottish households could earn as much as £580 every year by installing solar panels in their homes, new research claims. The figure includes £410 from the Feed-in Tariff (FIT) scheme, […] 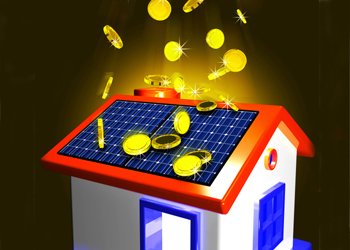 Scottish households could earn as much as £580 every year by installing solar panels in their homes, new research claims.

The figure includes £410 from the Feed-in Tariff (FIT) scheme, £64 from exporting renewable energy to the grid and £105 from savings on energy bills – bringing the total to £197 million a year and up to £2.7 billion over the lifetime of the PV system.

People in Scotland “vastly underestimate” how sunny the country is as 21% thought the country had 500 hours or less sunshine a year when the figure is more than twice that, the Energy Saving Trust (EST) revealed. Its survey also found almost half (47%) think they would be £350 a year or less better off with an average solar PV system, underplaying the technology’s benefits.

Anthony Kyriakides, Scottish renewables manager at the Energy Saving Trust said: “This study shows that Scotland’s climate is actually well suited to solar power, especially as even cloudy days can be used to generate electricity.

“The income and savings which can be made from solar power will be interesting to homeowners in Scotland who may never have considered a renewables system before. Additionally, other renewables like wind power, ground, and air-source heat pumps and wood fuelled boilers can bring huge savings on energy bills.”

The Scottish Government recently announced interest free loans of up to £10,000 for homeowners to install renewable systems. The YouGov survey of 1,021 Scottish adults was commissioned by the EST to explore the attitudes to domestic solar power.

Energy Secretary Ed Davey recently announced the Government will retain a scheme to help consumers in the North of Scotland, which is expected to save a total of £50 million a year on energy bills.