A solar-powered boat, believed to be the largest of its kind in the world, arrived in London over the weekend following a scientific expedition. The MS Turanor PlanetSolar is made […] 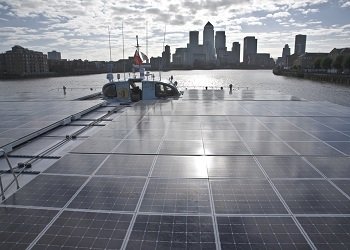 A solar-powered boat, believed to be the largest of its kind in the world, arrived in London over the weekend following a scientific expedition.

The MS Turanor PlanetSolar is made up of 809 solar panels, which can generate up to 480kWh of energy on a sunny day.

It smashed the world record by crossing the Atlantic Ocean in 22 days, cruising along the Thames before docking at Canary Wharf on Saturday.

The boat has been used by the University of Geneva (UNIGE) researchers, who have been collecting physical and biological measurements along the Gulf Stream – which has a big influence on UK weather – as part of the expedition.

They aim to get a better understanding of the interactions between the ocean and the atmosphere whilst also raising public awareness of the “complexity of climate change” and its impacts.

Martin Beniston, climatologist and director of the Institute of Environmental Sciences at UNIGE said: “PlanetSolar DeepWater made it possible to test several scientific instruments—some of which were prototypes developed at UNIGE—in real conditions. Extensive physical, chemical and biological data is now in the hands of UNIGE and will be the subject of a thorough analysis.”

PlanetSolar is a Swiss based initiative founded in 2004 with the aim of achieving the first around the world tour only powered by solar energy to demonstrate the potential of solar energy.