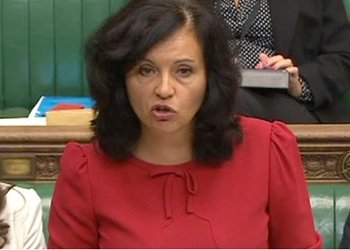 Shadow Energy Secretary Caroline Flint renewed attacks on the ‘excessive profits’ of the Big Six yesterday in Parliament calling for the Government to make amendments to the Energy Bill containing the Electricity Market Reform (EMR) measures.

Labour took the opportunity on opposition day to put forward a motion calling for a return to trading pools whereby energy companies are forced to sell the energy they generate on the wholesale market and make it available to any retailer.

Speaking to the House of Commons, the Shadow Energy Secretary said: “Energy companies claim that there is a whole raft of reasons why energy bills are going up—wholesale costs, network charges and social and environmental obligations. With all those extra costs, one might think that profit margins would have come down, but quite the opposite. It is now clear that, regardless of those costs, these companies have seen a substantial increase in their profits.”

Mrs Flint said the current wholesale market was lacking in transparency and competition and provided little incentive for the vertically integrated Big Six to cuts costs for customers. She quoted an estimate by the London Energy Brokers Association that daily trading on the wholesale market represented just 6% of electricity generated.

The Shadow Secretary added that as well making it difficult for independent suppliers to enter the market this problem would undermine the Government’s Contracts for Difference (CfD) proposals as a market rate for electricity couldn’t be determined.

The motion put forward by Labour also called for a new energy regulator to replace Ofgem with the power to force energy companies to cut prices in line with wholesale costs.

Mrs Flint said: “In a properly competitive market, cost reductions should be passed on as quickly and as fully as cost increases. At the moment, when wholesale costs increase, bills go up like a rocket but when wholesale costs fall, bills fall like a feather, if at all.”

Ed Davey, the Energy Secretary dismissed the motion and hit back, accusing Labour of “synthetic anger” and attacking their policy whilst in government:  “It was Labour that abolished the pool just over 10 years ago, at an estimated cost of £1.4 billion. Labour said that is was not working in the interests of consumers. Apparently things have changed. However, under the policies that Labour put in place after it abolished the pool, things have not got much better. Labour’s abolition of the pool produced the vertically integrated energy markets that we see today.”

The Energy Secretary pointed out it was the Opposition Party which introduced Ofgem, saying the Coalition had worked to strengthen the regulator. Mr Davey also slammed the Shadow Secretary for failing to define excessive profits and argued that cutting into margins too much would reduce badly needed investment.

In the end MPs voted down the Opposition-backed motion by 290 votes to 220.