The UK’s next generation of offshore wind turbines was inaugurated today, as Energy Minister Greg Barker officially opened an extension to the 172MW Gunsfleet wind farm on the coast of […] 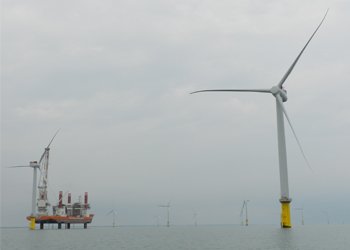 The UK’s next generation of offshore wind turbines was inaugurated today, as Energy Minister Greg Barker officially opened an extension to the 172MW Gunsfleet wind farm on the coast of Essex.

Unlike most of the turbines currently peppered across Britain’s coast, the 6MW turbines have been expressly designed to work at sea. Made by Siemens and installed by DONG Energy, the new more efficient turbines could make energy from offshore wind significantly cheaper, say the firms.

The two new turbines in the Gunsfleet Sands III extension were installed earlier this year (pictured) and are the first to be deployed offshore. They had previously only been tested on land in Denmark and will now begin three years of trials to evaluate their performance at sea. In July 2012 DONG Energy signed a deal to buy 300 of the turbines from Siemens for wind farms in the UK.

Henrik Stiesdal, Chief Technology Officer from Siemens Wind Power said: “Gunfleet Sands III is a very important project for us to bring the six megawatt direct drive turbine out to the offshore environment. The two prototypes have been pre-tested here under hardest conditions and we have made tremendous progress with the experiences gained by that. Now we will test the turbines under long-term conditions of normal energy production.”

Speaking at the opening ceremony Energy Minister Greg Barker said: “The Coalition is driving huge new investment to deliver both affordable bills and cleaner energy for consumers. This includes an important role for offshore wind. [The] Gunfleet Sands Offshore Wind Farm is an excellent and innovative example.”