Middlesbrough scores as first major FC to use wind

Middlesbrough football club are set to score in more ways than one as they’ve just signed a multi-million pound deal, not for a footballer – but for a wind turbine. […] 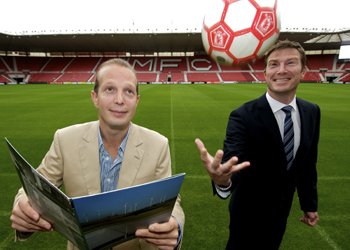 Middlesbrough football club are set to score in more ways than one as they’ve just signed a multi-million pound deal, not for a footballer – but for a wind turbine.

This will make them the nation’s first major football club and sporting venue to be entirely powered by the wind – and sneaks in a green goal past Manchester City whose own plan for a giant wind turbine was sin-binned in April 2010 over health and safety fears.

Costing £3.5m to plan for and install, the 1.5MW turbine will provide all the electricity required for the stadium for the next 20 years, kicking off generation from May 2014.

The Riverside Stadium’s 34,988 spectators won’t have to shift over seats to make room though – the 136m-tall wind turbine will be in the overflow car park.

Boro chief executive Neil Bausor declared it would give the 137-year-old championship club a “major environmental lead in football”.

The football chief said: “Energy consumption is a key factor for all businesses and we have worked incredibly hard in recent years to reduce our costs significantly. It is exciting to think we will become the UK’s first football club to have a completely sustainable energy consumption programme.”

The turbine will save the club an estimated 3,000 tonnes of carbon dioxide every year.

Paul Millinder, chief executive of London-based renewable energy developer Empowering Wind which supplied the turbine said the project is “the first of its kind in Europe and possibly worldwide.”

Though precise details of the deal are confidential, he added a turbine in a place with a similar power use and wind profile would save about £3.2m during the next 20 years at the current lowest commercial tariffs, although electricity prices are expected to rise sharply during the next decade.