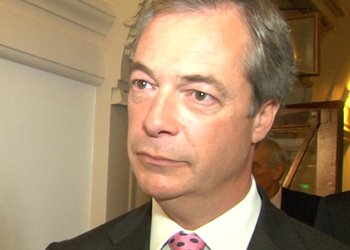 Today he also criticised European lawmakers for bringing the country to a point where the “lights go out by 2015” and slammed the “stupidity” of letting control of the country’s energy supply slip out of British hands.

Speaking on the sidelines of his party’s Autumn conference in London, the UKIP leader told ELN: “There’s actually the prospect we face in this country of the lights going out by 2015. If that doesn’t tell you the stupidity of handing over control of your economy, your life, to a bunch of foreign bureaucrats, what does?”

Under the EU’s Large Combustion Plant Directive, coal plants in the UK are closing while the Renewable Energy Directive means the UK must get 15% of energy from renewables by 2020. UKIP’s energy manifesto explicitly talks down this ambition.

Mr Farage added: “We want to be in control of our energy supply, we want cheap, reliable energy that does not make us dependent on other parts of the world and we want to scrap the wind programme because it’s too expensive and it doesn’t work.”

Earlier in his speech to the party faithful, the UKIP leader slated what he called the European Commission’s climate change “obsession” and said they will always act in the interests of the British nation – including on energy supply.

In his speech the Euro-sceptic also claimed the European Commission has made citizens poorer: “Through their mad Euro project, they’ve dragged tens of millions of people into poverty, because of their climate change obsession, they’ve destroyed the factory industry across Europe”.