Greenpeace International has dismissed new charges of piracy by Russian authorities, branding them a “desperate attempt” to justify what the group calls “the illegal boarding” of its ship in international […] 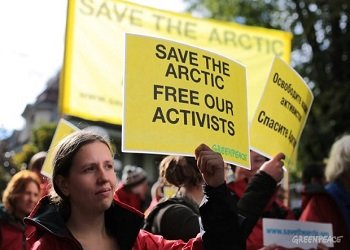 Greenpeace International has dismissed new charges of piracy by Russian authorities, branding them a “desperate attempt” to justify what the group calls “the illegal boarding” of its ship in international waters.

The Russian Coast Guard boarded the environmental group’s ship ‘Arctic Sunrise’ last Thursday and “held the people on board at gunpoint” following what Greenpeace claims was a “peaceful protest” against Gazprom’s plans to drill in the Arctic.

Thirty activists were on board, all of whom remain under armed guard and without legal representation, Greenpeace claims. It is demanding the authorities allow them to contact the campaigners immediately and plans to contest the piracy allegations.

The Investigative Committee of the Russian Federation announced on Friday it is formally considering charges of piracy against those on board.

It said in a statement: “In accordance with the presented materials FSS Border Russia in the Murmansk region in this incident will provide for an offense under article 227 of the Criminal Code (piracy).

“[The] Investigation Department… organised a procedural test, the results of which will be decided on the presence or absence of signs of the crime in the actions of Greenpeace.”

According to Greenpeace however, “piracy can only apply to violent acts against ships committed for private ends, not peaceful protests carried out to protect the environment”.

“Over a full day after our protest the Russian Coast guard boarded our ship outside of territorial waters, where there is right of free passage, with no legal justification whatsoever. This looks like a retrospective attempt to create that justification and avoid embarrassment,” he added.

The environmental group claims more than 230,000 people have written to Russian embassies and consulates around the world demanding their activists’ release. Greenpeace offices in more than 30 countries have organised solidarity protests (pictured).