Should the insurance industry do more to help encourage people and businesses towards clean energy sources? That was the question raised during Swiss Re’s 150th birthday celebrations at the Queen […] 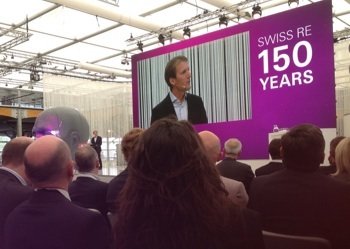 Should the insurance industry do more to help encourage people and businesses towards clean energy sources?

That was the question raised during Swiss Re’s 150th birthday celebrations at the Queen Elizabeth Olympic Park in London on Thursday.

A trillion-pound network of insurers and re-insurers stretches across the world, providing guarantees for natural disasters such as the tsunami which rocked Japan in 2011 to the more mundane examples of ice-cream van insurance and personal accidents.

The industry has been the “risk-taker and the shock-absorber” of the world, said Swiss Re’s Jean-Jacques Henchoz(pictured), chief executive for Reinsurance Europe, Middle East and Africa in a speech to kick-start the celebrations. What could it do for the future of energy by 2050?

The idea of “macro” intervention from governments was considered – such as punitive taxes – versus “micro” solutions with citizens responsible for their own energy efficiency efforts.

One speaker asked whether insurers could be more influential, with investing arms lending to more clean energy projects.

Perhaps the era of celebrity endorsements could help, suggested another – AVIVA sponsors Premiership Rugby and until recently Manchester United players had AIG on their shirts – speculating whether insurers’ sponsorship deals could be used to promote green power.

On the whole the insurers at the talks came away “optimistic”, according to Michael Liebriech, chief executive of Bloomberg New Energy Finance.

He told ELN: “The talks have been optimistic, there’s been a mix of well-informed and the less informed.”

Gesturing to his phone, he said: “Some found it difficult to picture the process of how we got to this [phone] for where solar could be by 2050 – that’s 37 years.”