Greenpeace has launched a legal challenge against fracking in England in a bid to halt plans for the controversial method of extracting shale gas from underground rocks. It made the […] 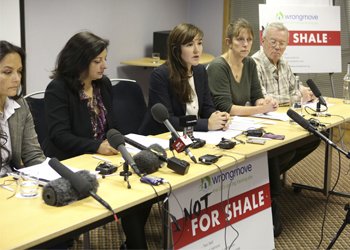 Greenpeace has launched a legal challenge against fracking in England in a bid to halt plans for the controversial method of extracting shale gas from underground rocks.

It made the announcement at a joint press conference (pictured) in Lancashire today with people whose homes are in the firing line of potential fracking sites, including those from Balcombe.

Greenpeace expects thousands of people to join the legal block against the “reckless and presumptuous” plans, creating a patchwork of “no-go” areas for the fracking industry across the country. The environmental group argues that plans to drill horizontally under people’s homes are “unlawful” if they don’t have permission from the owners.

Anna Jones, Greenpeace Senior Campaigner said: “Under English law, if you own land, your rights extend to all the ground beneath it. That means if someone drills under your home without permission it is trespass. To avoid being liable for trespass, drillers would need landowners’ permission. And this case is about people explicitly declaring they do not give that permission.”

It said in a statement: “Operators in this country are abiding by the law which states that activities at depths of over a mile under the ground do not impact landowners, however in line with the law, operators will inform all landowners in a very clear and transparent manner.

“Underground working is hardly something that is employed by just the oil and gas industry but includes, pipelines, fibre optics, geothermal energy and transport tunnelling to name but a few. This is an industry that has successfully been drilling for oil and gas onshore for over 150 years and has the opportunity to provide jobs, tax revenues, electricity and gas for citizens of this country for a long time to come and at a time when it has been shown we need it most.”

The challenge is the latest in a series of setbacks for Cuadrilla, the UK firm involved in fracking. Last week it confirmed it was closing one of its five exploration sites in Lancashire.