Chancellor George Osborne today said that the UK will allow Chinese companies to take a stake in Britain’s nuclear power plants. He made the announcement on the final day of […] 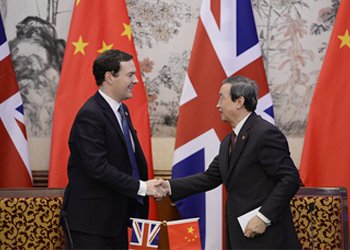 He made the announcement on the final day of his week-long trade visit to China at the Taishan nuclear power station – a collaboration between EDF Energy and the China General Nuclear Power Company – in the southern part of the country.

The decision to open the door for Chinese investment means the nation could in future take majority stakes in the development of next-generation British nuclear power.

Just days ago Energy Secretary Ed Davey hinted the Chinese could get involved in a new nuclear power station at Hinkley Point.

“It is an important potential part of the government’s plan for developing the next generation of nuclear power in Britain. It means the potential of more investment and jobs in Britain and lower long-term energy costs for consumers,” he added.

This week a new agreement between the UK and China on civil nuclear collaboration was signed in Beijing.

China has the largest nuclear build market in the world, with 17 nuclear reactors currently in operation – accounting for 1% or 13GW of the nation’s electricity production capacity. Another 28 nuclear plants are under construction, with total capacity expected to rise to 80GW by 2020 and 400GW by 2050.