Air, water and sun – not just a rejected band name but also apparently the recipe for homemade green petrol. Cambridge researchers say in a matter of decades households could […] 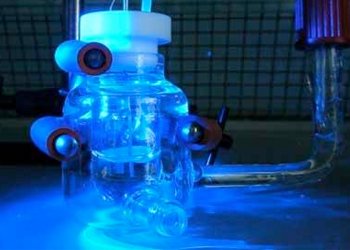 Air, water and sun – not just a rejected band name but also apparently the recipe for homemade green petrol.

Cambridge researchers say in a matter of decades households could be using sunlight to synthesise their own fuel, using a method that mimics the natural process of photosynthesis.

It works by using solar energy to separate water and carbon dioxide into the elements that make them up. The result is synthetic gas or ‘syngas’ for short – a mix of hydrogen and carbon monoxide. The mixture can then be converted into hydrocarbons such as petrol using an established industrial process.

Creating the hydrogen in the syngas requires a catalyst to start off the reaction. Platinum would typically be used but it is neither cheap not plentiful – quite the opposite in fact.

Taking inspiration from ‘hydrogenases’ found in nature, the researchers created their own artificial catalyst using the less costly and more abundant metals of iron, nickel and cobalt.

Dr Erwin Reisner, who leads the Christian Doppler Laboratory in the University of Cambridge’s Department of Chemistry said: “Syngas has been made successfully at an industrial level for decades …. but it requires fossil fuels to make syngas, thereby depleting our natural reserves and producing the greenhouse gas CO2 as a by-product. It’s therefore neither renewable nor clean.

“The process we are developing is sustainable because it uses sunlight-driven water splitting and takes carbon from the atmosphere only to return it when the syngas is used for the release of energy.”