A company selling what it claims is the world’s most efficient small-scale electricity generator has told ELN it can create “six million” energy generators across the country. That’s in response […] 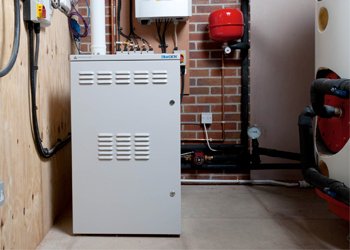 A company selling what it claims is the world’s most efficient small-scale electricity generator has told ELN it can create “six million” energy generators across the country.

That’s in response to remarks from Energy Minister Greg Barker on his hopes community energy schemes can create 60,000 electricity suppliers in the UK.

Ceramic Fuel Cells claims its generator is nearly as efficient at converting gas to electricity as a large power plant’s Combined Cycle Gas Turbine. It says the BlueGen generator (pictured) has a peak rate of 60% and doesn’t lose anywhere near as much electricity in carrying it to energy users.

The generator works like a gas-powered battery, generating power electrochemically rather than through combustion. It can also use the heat generated by the fuel cell for hot water and the company says this can push the efficiency figure up to 85%.

The maker claims the bottom line result is a 20% cut in energy bills for a typical user.

Paddy Thompson, General Manager Business Development for Ceramic Fuel Cells told ELN: “In some cases there are diseconomies of scale. If we can generate in response to demand on a local level, then we can make the system much more efficient.”

With a chunky price tag of £19,000 to install, the firm is also offering to do this for ‘free’, leaving users to pay for energy bills and maintenance. The upfront cost is then repaid from the proceeds of the Feed in Tariff and export tariff over the course of ten years.

The generator is internet connected and can be remotely operated. The firm says this mean they could be operated by suppliers in future.