“Electronic blood” will fuel and cool computers of the future

IBM has unveiled a prototype of a new computer (pictured) powered by what it describes as “electronic blood”. It’s hoped it could lead to more energy efficient computers in the […] 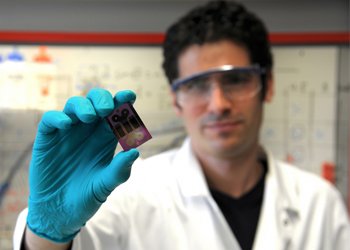 IBM has unveiled a prototype of a new computer (pictured) powered by what it describes as “electronic blood”. It’s hoped it could lead to more energy efficient computers in the future.

The team working on the project in Zurich took inspiration from the human brain, which is both smaller and more powerful than any of the firm’s supercomputers yet requires just 20 watts of energy to function.

IBM scientist and project leader, Dr Bruno Michel is quoted as saying: “The human brain is 10,000 times more dense and efficient than any computer today.

“That’s possible because it uses only one – extremely efficient – network of capillaries and blood vessels to transport heat and energy – all at the same time.”

IBM hopes its “redox flow” system, which uses a single electrolyte “blood” for both fuelling and cooling, will pave the way for 3D computer chips. At the moment processors have to be laid out flat so heat can escape.

Dr Michel said: “99% of a computer’s volume is devoted to cooling and powering. Only 1% is used to process information. And we think we’ve built a good computer?

“The brain uses 40% of its volume for functional performance and only 10% for energy and cooling.”

IBM believes it can create 3D computer chips that will rival the brain for power and efficiency, by stacking processors and memory storage units on top of each other and weaving vessels among the stacks to carry the “electronic blood.”

Dr Michel said the resulting savings could be huge: “The computer industry uses $30bn (£18.6bn) of energy and throws it out of the window. We’re creating hot air for $30bn.”