The UK’s first all electric pay-per-use car club has launched today in East London. The E-Car Club switched on the ignition in the London Borough of Tower Hamlets, where the […] 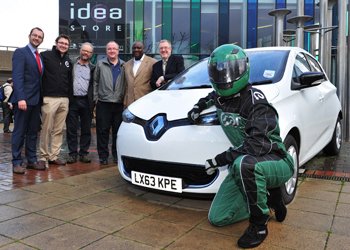 The E-Car Club switched on the ignition in the London Borough of Tower Hamlets, where the company is working with the social housing landlord Poplar HARCA, the owner of 9,000 local homes. The first cars available to residents are the Renault Zoe and Renault Fluence.

Guests at the launch included the electric vehicle enthusiast Robert Llewellyn of Red Dwarf fame and the Transport Minister Baroness Kramer, who officially opened the club.

Baroness Kramer said: “E-Car Club is a scheme that kills three birds with one stone – congestion, cost and carbon.”

Christopher Morris, Co-Founder of E-Car Club said: “The E-Car mission is a simple, if ambitious, one. We want to improve mobility on a local level whilst simultaneously reducing both the cost and environmental impact of each journey taken.”

The London launch follows on from two pilot schemes, a community-led project in Milton Keynes launched in October 2012 and a partnership with Luton Borough Council earlier this year.

The company is planning to open similar schemes in Oxford, at the University of Hertfordshire and Maylands Business Park in north-west London in the coming months. It intends to go nationwide further down the road.