Nick Clegg: Cutting green taxes would be an 'own goal'

David Cameron’s pledge to strip green taxes from energy bills would be an “own goal” which could cost jobs and reduce support for poor households, Nick Clegg warned. Yesterday the […] 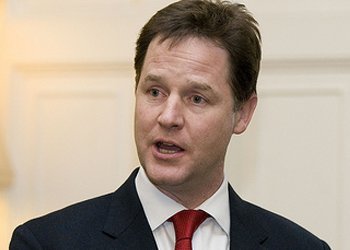 David Cameron’s pledge to strip green taxes from energy bills would be an “own goal” which could cost jobs and reduce support for poor households, Nick Clegg warned.

Yesterday the Prime Minister announced a review of competition within the energy market and signalled he wanted to “get to grips” with green charges which suppliers have claimed are driving up energy bills.

He added: “I’m not frankly entirely sure what ‘rolling back’ green levies mean. If removing all green levies which help two million people on very low incomes, which helps support thousands of jobs in our green renewable energy sector, if that is what he meant, I think that would be an own goal.”

Mr Clegg said he does not accept green taxes are the main reason for the price hikes: “Actually about 60% of the total increase in energy prices since the general election have come because of wholesale, so-called international prices.”

The Deputy Prime Minister said he will be working with Mr Cameron to examine and conduct “stress tests” on whether the policies can be delivered in a “more cost-effective way”.

“If we can deliver those objectives of keeping the lights on, insulating people’s homes helping the fuel-poor, supporting the green economy for less, of course I don’t want to see an extra penny go on people’s bills that is absolutely necessary,” he added.

He stressed he was confident he could “resolve” the differences with the Prime Minister on the policy.

When asked about Labour leader Ed Miliband’s price freeze pledge, Mr Clegg referred to it as a “con”.

He added: “If he actually did what he suggested, prices would go up not down, jobs would go down. There’d be less investment in our renewable green sector.