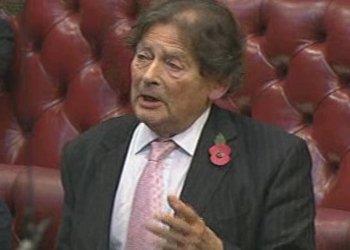 Lord Lawson yesterday laid into the Energy Bill as “worse than old-style nationalisation” and questioned why it gives powers to the Energy Secretary to sign off deals with companies to provide power firms.

Yesterday the legislation continued its passage through the House of Lords.

The former Chancellor of the Exchequer weighed in against the bill by declaring: “This is not an energy bill at all, it’s a decarbonisation one… I take the old fashioned view an energy bill ought to be an energy bill. It should provide the poorest people, business and industry with the cheapest energy.”

Lord Lawson went on: “It makes old style nationalisation something we’ll look back to rather with nostalgia. It’s worse than a return to the past, it’s something even worse than the past.”

He suggested investment in energy intensive industries is already being drawn to other countries such as the US, adding: “Nobody in energy policy has a reputable word to say about this bill.”

Earlier in the session, Lord O’Neill of Clackmannan spoke in favour of a decarbonisation target, saying he “can rarely remember such a spectrum of voices” in support for a proposal.

He said if something is decided in 2016 “it won’t happen until 2019”, suggesting there are too many people unemployed at the moment whose “talents and energy” could be employed in green jobs.

His words were to no avail as an amendment to include a target to decarbonise the power industry in the Energy Bill failed, with 216 votes against versus 202 in favour.