It’s the maddening drawback for a smartphone user – running out of battery. A new device to power electronic kit such as phones, tablets and games consoles could change all […] 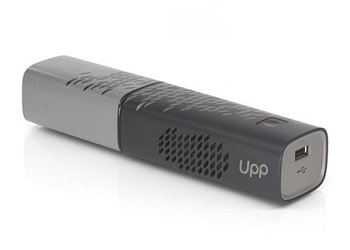 It’s the maddening drawback for a smartphone user – running out of battery.

A new device to power electronic kit such as phones, tablets and games consoles could change all that – and it’s a miniature fuel cell.

Called the Upp fuel cell, it delivers at least one week of charge. It works by taking hydrogen from a fuel cartridge and combining it with air to produce ‘clean’ electricity with water vapour as a by-product.

The cartridges can be reused “multiple times” according to Loughborough-based Intelligent Energy which brought out the Upp.

It will be released across Africa next month and rolled out around the world in 2014. A spokesperson told ELN that if a network such as O2 wanted to sell them, it could offer the Upp for free as part of a package.

Henri Winand, CEO of Intelligent Energy said: “With the growing demand for portable devices, mobile and cloud services, consumers want the energy independence to keep their devices connected and powered-up all the time.

The Upp could be a “real game changer” for Africa, added Amar Samra, Managing Director of Consumer Electronics for the firm.

He said: “Batteries need help: their capabilities haven’t kept pace with innovation in smart connected portable devices. Given that 75% of the global population relies on the mobile phone to stay connected, the more you want to do with your device, the more energy you need. Consumers need a reliable source of personal and portable energy”.