Where does it come from, asks Robert Llewellyn

Where does it come from? That was the question which sparked his energy revelation, the electric vehicle enthusiast Robert Llewelyn told the audience at Energy Live 2013. The Red Dwarf […] 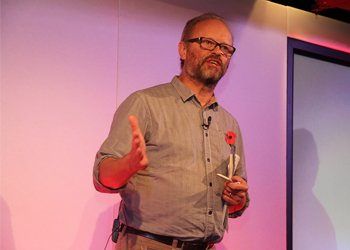 Where does it come from? That was the question which sparked his energy revelation, the electric vehicle enthusiast Robert Llewelyn told the audience at Energy Live 2013.

The Red Dwarf actor and television presenter said: “It’s actually really annoying driving electric cars… because the first time you drive one you go, well hang on a minute, hang on a minute.

“Where does the electricity come from?”

He added: “It’s all well and good getting all posey and tofu ridden and wearing your bloody sandals and holding up your anti-fracking poster.

“Where does the electricity come from? It comes from burning coal. I know it’s true because Clarkson told me.”

Robert said another revelation soon followed after stepping back into his Golf R32,  which he described as “the most inefficient Volkswagen Golf ever created”.

He continued: “Hang on a minute, where does the petrol come from? I’d never, never asked that question in my life.”

Robert found the answer whilst filming an episode of ‘How do they do it?’ at an oil refinery in Pembrokeshire, where he discovered the enormous amount of electricity they used for refining.

He recalled being proudly told by the site’s Chief Engineer: “We use more electricity here than Coventry and Leicester combined.”

His curiousity sparked, Robert left determined to find out how much power Britain uses to make petrol and diesel. After a long search, he eventually came across some UN statistics from 2005 – the latest available. He said they showed the UK used a colossal 5,642 GWh of electricity at its refineries over the course of the year.

Robert left the audience with something to remember: “When someone reads out the CO2 emissions from an exhaust pipe – 157 grams per kilometre – that’s one third of the CO2 that’s produced to drive that kilometre.”

Click here to see his talk at Energy Live 2013 in full.