Sainsbury’s is opening a store it claims is “triple zero” – that is, emitting zero carbon emissions from the energy it uses, sending no waste to landfill and with zero […] 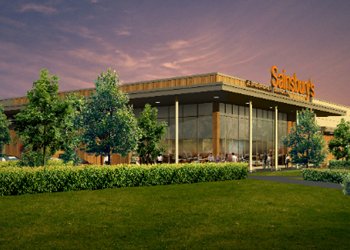 Sainsbury’s is opening a store it claims is “triple zero” – that is, emitting zero carbon emissions from the energy it uses, sending no waste to landfill and with zero impact on water use in its local area.

Opening on Wednesday, the supermarket says the new 81,700 sq ft Leicester branch is its most environmentally friendly to date and one of two to be “triple zero”.

All of the store’s electricity and heating will be provided by a generator on the site. Its combined heat and power system will use natural gas from the national gas grid.

The equivalent amount of ‘zero carbon’ biogas needed for the store each year will be imported into the network from an anaerobic digestion facility in West Sussex, “thus creating a closed loop” according to Sainsbury’s.

Any surplus food is donated to local charities or made into animal feed unless it’s not suitable to eat, when it is used to generate energy through anaerobic digestion. All general waste will be recycled or turned into fuel.

Sainsbury’s said the store will have zero impact on the water usage of the local catchment area because of its ‘Water Neutral’ status.

The supermarket touted the timber structural frame for creating a lower carbon footprint than a standard steel frame.

Alongside LED lighting, 120 “prismatic” roof lights let in plenty of natural light, more than 1,200 solar PV panels on the roof will generate electricity for the site. The petrol station’s roof canopy over the fuel pumps is also made of solar panels which will power the kiosk.

Neil Sachdev, Sainsbury’s Property Director, said: “We aim to be the UK’s Greenest Grocer and achieve our 20×20 target to reduce our operational carbon emissions by 30% absolute.  To do this we’re now building and running highly sustainable, low carbon stores.

“Our new ‘Triple Zero’ stores in Leicester and Weymouth Gateway are examples of how we’re achieving this, by using power generated from waste in our supply chain and ‘Water Neutral’, which includes offsetting partnerships in the local community.”