Angry protestors today demanded the Government should renationalise the UK’s energy system. Shouting at the top of their voices “energy for our needs, not corporate greed”, a group of roughly […] 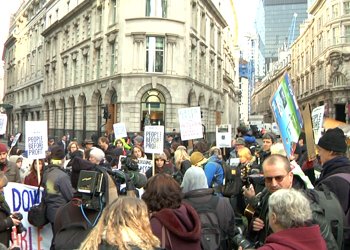 Shouting at the top of their voices “energy for our needs, not corporate greed”, a group of roughly 100 gathered in London’s business district to criticise the country’s largest energy suppliers.

Pointing to new statistics which show the number of excess winter deaths rose to 31,100 in 2013, the protestors blamed this on rising fuel poverty. They fingered suppliers, especially npower, as well as the Government as responsible for this.

A touch of black humour was on display as the protestors carried a coffin to the London office of supplier npower.

Betty Cottingham from the Greater London Pensioners Association who joined the march from the Bank of England to npower’s office on Threadneedle Street, said: “I blame the six biggest energy companies because they’re in cahoots together to make enormous profits and there’s no reason if they want to invest why they can’t use some of those profits.”

She pointed to examples in other countries: “It may seem difficult but it happens elsewhere in the world. The city of Hamburg in Germany has just bought back the whole grid, and the city of two million people there is being run [by] the city.”

Another protestor called Peter told ELN it is “essential” the UK renationalise its energy system: “What we got sold originally was that the prices would come down, that it would be in the benefit of everybody and that’s simply not true. The prices of all these things have gone up. I think it’s really time to look again at nationalising our essential public services.”

Energy supplier npower has rebuffed criticism, saying energy companies are “part of the solution, not part of the problem.”

In a statement the firm said: “Although energy suppliers like npower only control around 16% of the total cost in people’s energy bills, we employ more than 100 people whose sole job is to provide support to our most vulnerable customers and deliver real savings through energy efficiency.

“We’ll be spending around £35 million this winter helping low-income and vulnerable customers through financial support, free energy efficiency measures and advice, and our Health Through Warmth scheme.”

Calls for nationalisation are sure to prove a headache for the Coalition which is shepherding reform of the energy market through parliament in the Energy Bill at the moment.

The reforms will be scant comfort for Betty, who added: “I think the Government could do a lot to lean on them [suppliers] if they wanted to… I’d really like to see fuel companies taken back into public ownership. It’s a social need and therefore it should be met by the Government. They should be in charge, not the big companies making profits.”