US energy firm to pay $1m for ‘killing birds’

A renewable energy firm in the US has agreed to pay $1 million (£0.6m) for “killing protected birds” at two of its wind farms. Duke Energy Renewables agreed to the […] 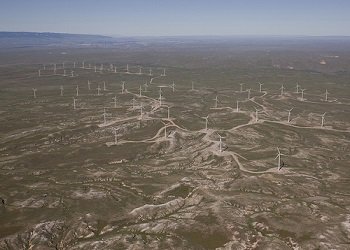 A renewable energy firm in the US has agreed to pay $1 million (£0.6m) for “killing protected birds” at two of its wind farms.

Duke Energy Renewables agreed to the amount after pleading guilty to the charges over the deaths of 14 golden eagles and 149 other protected birds. These took place over the last three years at two Wyoming sites that have 176 large wind turbines.

The US Justice Department said: “Duke Energy Renewables failed to make all reasonable efforts to build the projects in a way that would avoid the risk of avian deaths by collision with turbine blades, despite prior warnings about this issue.”

The energy firm has however taken steps to minimise the hazard after the projects came online.

Tim Hayes, environmental development director at Duke Energy Renewables said: “Top of the World (pictured) and Campbell Hill were some of the first wind sites we brought into service, during a period when our company’s and the wind industry’s understanding of eagle impacts at wind farms was still evolving.”

It is the first ever criminal conviction under the ‘Migratory Bird Treaty Act’ for unlawful avian “takings” at wind projects. The legislation is meant to protect more than 1,000 species of birds and makes the killing of such birds a federal offence. The golden eagle is not endangered but it has been federally protected since 1962.