A hydroelectric energy storage facility in Scotland got the all clear from Scottish Energy Minister Fergus Ewing today. The ‘pumped storage system’ is being developed by SSE and will involve […] 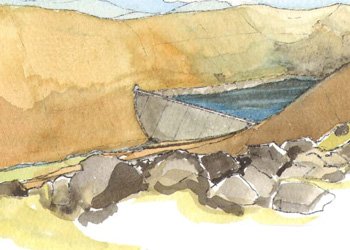 A hydroelectric energy storage facility in Scotland got the all clear from Scottish Energy Minister Fergus Ewing today.

The ‘pumped storage system’ is being developed by SSE and will involve two bodies of water at different heights.

During periods of low demand for electricity, power will be used to pump water from the lower body of water – Loch Lochy – up to the higher body – Loch a’ Choire Ghlais.

When there is high demand for electricity water will be directed back downwards – driving turbines and generating electricity on the way.

The water will be transferred between the lochs via tunnels and an underground cavern power station. A dam and reservoir will also be built at Loch a ’Choire Ghlais (pictured – artist’s impression), along with an outlet area on the shore of Loch Lochy.

The project is expected create 150 jobs over the five to six years it will take to build.

Mr Ewing said: “This scheme will be by far the most powerful of its kind in Scotland. Whilst generating it will have the potential to provide up to 10% of Scotland’s estimated peak electricity demand.”

Jim Smith, Managing Director of SSE Renewables said: “The combination of the size, flexibility and short response time means that Coire Glas could provide a range of benefits across the whole [British] electricity system in a way that no other proven technology can.”

However there are some “major hurdles” to overcome with the Coire Glas project including “commercial challenges”, he said, which the company wants to work on with the UK and Scottish governments.