Anti-fracking protestors have blockaded IGas’s Barton Moss drilling site for the second time this week. On Monday they got into the festive spirit by giving the drilling company a fracking […] 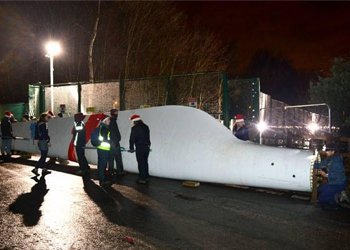 On Monday they got into the festive spirit by giving the drilling company a fracking great stocking filler – a 17 metre long, one and half tonne wind turbine blade, wrapped in a big red bow (pictured).

Sandra Denton, one of the protestors filling in for Santa said: “We’ve delivered this early Christmas gift to IGas to remind them that we don’t need damaging, risky and polluting energy sources like oil and gas to power the UK.”

It’s not clear if they were given a gift receipt to exchange it for something else but IGas promptly removed the blade, which was stopping vehicles getting in.

The protestors weren’t done and yesterday returned with another present for the company – this time a bus. Like the turbine blade it’s now also been taken away.

IGas CEO, Andrew Austin was reported as saying: “We accept people’s legitimate right to protest and hold different views to those we hold. What’s unfortunate is when they disrupt the lives of other people on the road of Barton Moss, that’s a little unfair.”

He added: “The enemy in this agenda is coal. Shale gas is the same as any other form of natural gas. If you use that locally you’re supporting decarbonising, you’re displacing coal and you’re supporting renewables.”