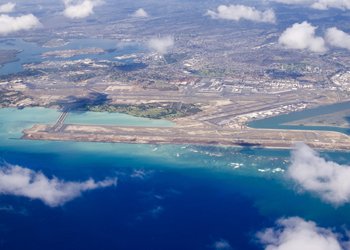 Hawaii’s airports are undergoing a giant revamp to slash energy use by 49% and save the US state at least $518 million (£315m) in energy costs over the next 20 years.

The state’s six major islands have 15 airports including Honolulu airport (pictured). The project will help Hawaii towards an ambitious target of getting 70% of its energy from clean sources by 2030.

The airports will get smart controls while their chilled water and air conditioning systems will be replaced or upgraded.

Airports are one of the state’s biggest energy users, according to the transport department’s Director Glenn M. Okimoto: “DOT will make a large impact since the state airports system is the third largest consumer of electricity in Hawaii. This project will save the state millions of dollars and it will serve as a model for other state agencies.”

The $150 million (£91m) contract was awarded to Johnson Controls, the firm responsible for revamping the Empire State Building in New York.

State Governor Neil Abercrombie said: “This project is a long-term investment, which will cut the energy use at our airports nearly in half, reduce our dependence on imported energy sources, provide savings on future energy costs and add jobs to our economy.”

Hawaii has been hard at work on efficiency for the past two decades, with nine similar projects affecting more than 115 buildings, hospitals, courthouses and school premises, saving an estimated $341.3 million (£208m) over 20 years.