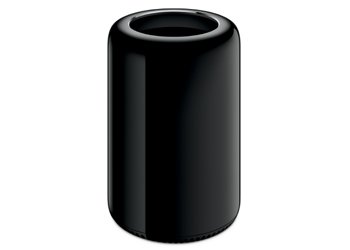 Tech firm Apple turned heads when it unveiled a sleek black new look for its Mac Pro computer – and it claims the futuristic design is “energy efficient right out of the box”.

In an environmental report, it says the desktop is “extremely material efficient”, using 74% less aluminium and steel compared with the previous generation Mac Pro.

The report states: “Because one of the largest portions of product-related greenhouse gas emissions results from actual use, energy efficiency is a key part of each product’s design.”

This Mac Pro uses 68% less power in idle mode than the previous-generation and in total the greenhouse gas emissions are 940 kilograms of CO2 equivalent (kg CO2e).

Two-thirds of that carbon footprint (65%) comes from producing the desktop, a third (33%) from customer use and 1% a piece from recycling and transport.

The packaging is also less wasteful, weighing 84% less and with 82% less volume than the previous version, allowing three times more units to fit in an airline shipping container, stated the report.

Bagging a gold rating under the EPEAT, a global system which rates green computers and electronics, the Mac also uses half the allowed amount of energy than the top band in the US Government’s Energy Star scheme.

The new design may not satisfy critics concerned by reports last August of Chinese factories making Apple products polluting nearby rivers with chemicals. The electronics supplier Foxconn said it complies with emissions standards.