Saudi Arabian officials have confiscated 40,000 air conditioners from stores which don’t meet the country’s energy saving requirements. The Ministry of Commerce and Industry said yesterday inspectors have been doing […] 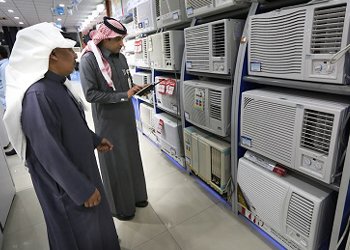 The Ministry of Commerce and Industry said yesterday inspectors have been doing the rounds in air conditioning markets and shops over the past few days and will continue throughout 2014.

A new rule appears to demands commercial buildings put an Energy Efficiency Card on the air conditioners, with a star rating for its energy use.

Different types of units can have different ratings, a minimum of four stars for split conditioners and three stars for “window type” conditioners.

Inspections are meant to send businesses the message to put the Energy Efficiency Cards on air conditioners and to “punish the violators”, added the MCI in a statement.

Shoppers are also being asked to report any sellers without the appropriate cards.

The efficiency campaign began on 1 January and on its first day 3,000 conditioners were confiscated, on the second day 10,000 and by the fourth the total reached 15,433 units.

It’s all part of a scheme run jointly by the Saudi Centre for Energy Efficiency, the Saudi Standards, Metrology and Quality organisation and Saudi customs officials.