Southeast Asia will require around $1.7 trillion (£1.05tn) worth of investment in energy infrastructure over the next two decades to cope with an increase in demand. In a new report […] 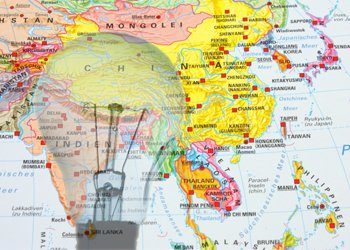 Southeast Asia will require around $1.7 trillion (£1.05tn) worth of investment in energy infrastructure over the next two decades to cope with an increase in demand.

In a new report looking into Southeast Asia’s energy future, the International Energy Agency (IEA) called for the region to take “serious action” to improve energy efficiency in a bid to reduce demand as its dependence on oil imports could rise drastically while natural gas and coal exports fall.

Securing the investment, however, could be tough as the report notes “underdeveloped energy transport networks, the need for greater stability and consistency in the application of energy-related policies and subsidised energy prices” as key challenges that must be overcome to get the level of investment.

The region’s current energy usage per person is still low as 134 million people lack access to electricity but demand is likely to increase by more than 80% through to 2035, the IEA warned.

Southeast Asia’s oil bill for imports is predicted to triple to $240 billion (£148bn) by 2035 as the region will guzzle just over five million barrels of oil per day. The figure is double the current consumption, making it the world’s fourth largest importer after China, India and the EU. During the same period, oil production could fall by almost a third due to a decline in mature fields and limited new prospects.

IEA Executive Director Maria van der Hoeven said: “Southeast Asia is, along with China and India, shifting the centre of gravity of the global energy system to Asia.”

She added: “Energy security promises to become an elevated priority as reliance on oil imports rises across the region. So too does the need to ensure that energy supplies are affordable, in order to support continued economic growth and development. And removing barriers to energy efficiency and cleaner sources of energy also looks set to become a major imperative, especially in the context of the region’s fast-rising energy demand, the expanding role of coal in its energy mix and its growing urban population.”

The 10 countries that make up Southeast Asia are home to about 600 million people and a combined annual GDP of $2.1 trillion (£1.3tn).