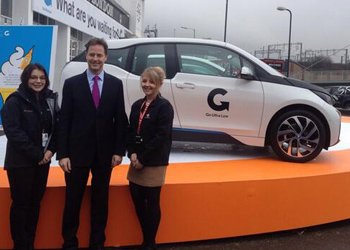 This includes 140 new rapid chargepoints which can charge an electric car in less than half an hour.

Currently there are more than 6,000 public chargepoints across the UK.

Mr Clegg said: “Electric cars are one of the most promising of our green industries and we want to secure the UK’s position as a global leader in both the production and adoption of these vehicles.”

Mike Hawes, Chief Executive of the Society of Motor Manufacturers and Traders said: “The Go Ultra Low campaign will help the public understand how these new cars work and how they could be a perfect fit for their personal, business or fleet needs.”

The £9.3 million will come from a £37 million pot for electric vehicle infrastructure announced in July 2013.