A total of seven million people, including 2.2 million children, are living in fuel poverty in England. New figures released today claim the number of children “growing up cold” has […] 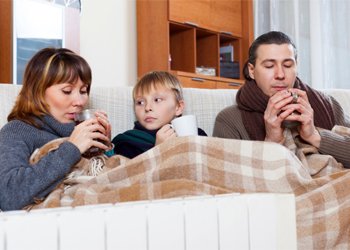 A total of seven million people, including 2.2 million children, are living in fuel poverty in England.

One in five Brits have switched off their heating this winter to save money “despite being cold at home”. Nearly half (48%) have cut back on other spending in order to pay to heat their homes, “with sacrifices including school equipment and clothing or food for the family”, the Energy Bill Revolution claims.

It blames the rising figures to “high energy bills, cuts to Government support for the fuel poor and the woeful standards of insulation” of homes in Britain.

The number of fuel poor people is based on the new definition of fuel poverty in England, which refers to “those who live below the poverty line and have an energy bill higher than the median”.

Ed Matthew, Director of the Energy Bill Revolution believes the rising number is a “national tragedy” and that the Government’s efforts to tackle it have so far been “utterly inadequate”.

He added: “There’s a simple solution to this crisis – we must stop our homes leaking heat. The Government must make this the UK’s number one infrastructure spending priority. Better insulation will save families hundreds of pounds on their energy bills and eliminate fuel poverty once and for all.”

The Government however said the research “is not as comprehensive as the official statistics”.

DECC claims fuel poverty is falling as 3.2 million were fuel poor in 2011 under the 10% definition but the figure fell to 2.4 million under the current ‘low income high cost’ definition.

A spokesperson added: “The Government is doing everything within its power to help hard-pressed families keep their energy bills down. We’ve already announced plans that will save customers around £50 on their energy bills and 230,000 vulnerable and deprived households will be warmer this year through energy efficiency measures under the Energy Company Obligation scheme.

“There is also direct help for people with their bills this winter through the Warm Home Discount, Winter Fuel Payments and Cold Weather Payments.”