Legendary fashion designer Vivienne Westwood (pictured) joined hundreds of activists in London today in protest against the controversial method of extracting shale gas – fracking. To the beat of a […] 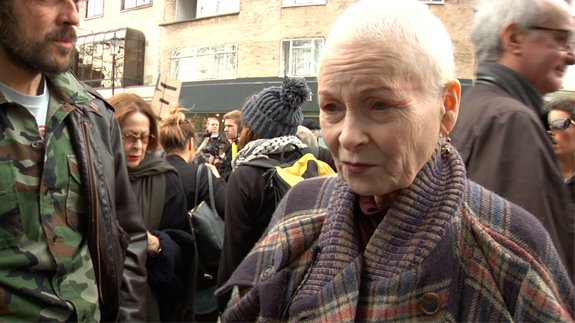 To the beat of a samba band and live DJ set, protesters waved banners that read ‘Frack Free Future’, ‘Don’t frack with our water’ and ‘Fracking will poison’ to spread their message that the UK could see a polluted future if the shale gas industry takes off.

The ‘Fracked Future Carnival’ tried to draw attention to the Shale Gas Forum in London which had officials from Cuadrilla and IGas – the companies whose drilling sites have been the focus of protest camps in Balcombe and Salford – as well as DECC and the Environment Agency.

The conference changed location at the last minute – an apparent attempt to throw the protest off their track – but dogged campaigners marched to the new gated venue to make their voices heard.

Speaking to ELN about why she was supporting the protest, Ms Westwood said: “It’s just a matter of life and death and it’s an amazing fight that we have to put up. It’s the most important fight the human race can ever have because we face mass extinction if we don’t sort it out. We have to start somewhere and that’s now.”

She added: “The first thing we’re trying to do is to put a halt to the government’s plans to fracking by informing the general public of what’s going on because until now the government are lying and they’re criminals.”

People came from all over the country to join the action. One who called himself a “fracktivist” said: “I am not protesting. I’m an earth protector. I’m protecting the earth.”

Another who came from Portsmouth had a message for shale gas companies: “We will not stand for this. We will be at every frack site, we will try to be at every conference. We’ll publicly be there to stop you.”