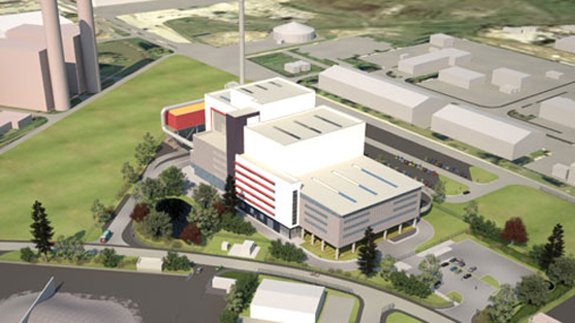 The UK Green Investment Bank (GIB) has pledged to invest £51 million in a proposed waste-to-energy facility in Kings Lynn, Norfolk.

The Willows Power & Recycling Centre (pictured, artist’s impression) is expected to process 170,000 tonnes of household waste and 100,000 tonnes of commercial and industrial waste. That would be converted into 170GWh of electricity every year – enough to meet the annual energy needs of over 40,000 homes.

The project, however, has yet to receive a final planning decision from the government.

Last week Norfolk County Council announced it would hold an “Extraordinary Meeting” next month for County Councillors to debate the future of the facility.

It said the meeting has been called so the Council can consider whether or not to continue with the project, due to the “delay” in a decision from the Department for Communities and Local Government (DCLG), to avoid an increase in the compensation figure – currently capped at £20.3 million.

The GIB’s investment will be made alongside two other existing lenders, it said.