Closer energy ties between Europe and the United States would be “good” for both parties, US President Barack Obama said this week. The US leader was in Brussels for the […] 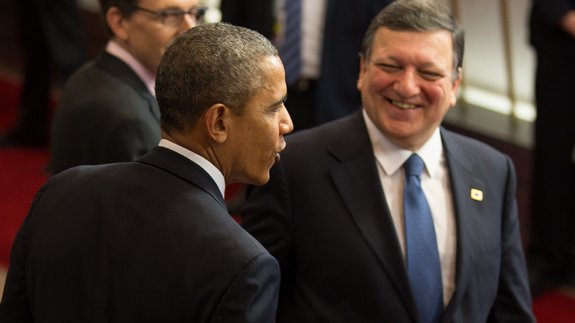 Closer energy ties between Europe and the United States would be “good” for both parties, US President Barack Obama said this week.

The US leader was in Brussels for the EU-US Summit and met Manuel Barroso, President of the European Commission to discuss the Ukraine crisis and imposing sanctions on Russia for annexing Crimea.

Fears for gas supply and rising gas prices have lurked since civil unrest broke out in Ukraine. Roughly a third of Europe’s gas comes through Ukraine from Russia.

Eastern Europe’s V4 nations called on America to send some of its shale gas over the Atlantic, which depends on how quickly the US can sign off the Transatlantic Trade and Investment Partnership with Europe.

Touching on this in a press briefing on Wednesday, Mr Obama said: “We’ve already licensed, authorised the export of as much natural gas each day as Europe uses each day. But it’s going into the open market; it’s not targeted directly.”

There may be ways to speed up the process of increasing export licences, said Mr Obama but it’s “not something that can happen overnight”.

Once the TTIP is in place, he added, “export licenses for projects for liquefied natural gas destined to Europe would be much easier”.

President Barroso said Europe was working to be less reliant on fewer energy sources, opening a new gas route from from Azerbaijan, the southern corridor, as well as boosting gas trading and interconnections between countries.”

But he added that North American gas would be a “blessing” for the continent: “I would say it’s also a blessing for the world, because countries like European countries and others would be less dependent on energy coming from, let’s say, difficult spots.”

Next week US Secretary of State John Kerry and the EU’s foreign policy chief Catherine Ashton will chair a meeting of European and US energy ministers on cooperating in energy, said Mr Barroso.