Thousands of government buildings, hospitals, factories, supermarkets and car parks around the UK are to get solar panels under the Government’s new solar strategy launched today. Even the Ministry of […] 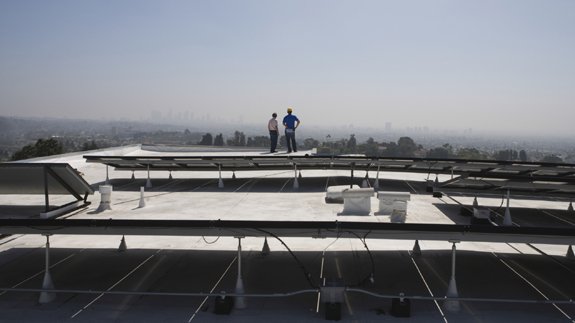 Thousands of government buildings, hospitals, factories, supermarkets and car parks around the UK are to get solar panels under the Government’s new solar strategy launched today.

Even the Ministry of Defence will have panels slapped on its offices as ministers aim to turn the nation’s rooftops into power stations, including 1GW of solar PV on public buildings through a major programme led by DECC and the Cabinet Office.

Launching the strategy at SunSolar Energy in Birmingham today, Energy Minister Greg Barker said:  “There is massive potential to turn our large buildings into power stations and we must seize the opportunity this offers to boost our economy as part of our long term economic plan.

“Solar not only benefits the environment, it will see British job creation and deliver the clean and reliable energy supplies that the country needs at the lowest possible cost to consumers.”

Targeting rooftops is a canny step because it avoids the grumbles which some large solar farms have faced when filling fields with panels.

Education is set for a solar overhaul too, with 24,000 schools in England and Wales to get solar panels in the 2020 strategy.

The Department for Education also wants to improve energy efficiency across the 22,000 schools in England to slash their annual energy spend of £500 million.

Education Secretary Michael Gove said: “Solar panels are a sensible choice for schools, particularly in terms of the financial benefits they can bring. It is also a great way for pupils to engage with environmental issues and think about where energy comes from.”

It’s evidence of the turnaround for the Coalition’s relationship with the solar industry which was in a choppy state two years ago during the solar FiTs fiasco, when it dramatically halved solar subsidies.

Paul Barwell, Chief Executive of the Solar Trade Association said: “Solar has not only been recognised by DECC as a key UK technology, but now has its own dedicated strategy – the first in Europe.

“It’s a clever move by the UK Government to start strategising to maximise its stake in a global market estimated at $134 billion by 2020.”