Twitter is being urged to follow in the footsteps of other internet giants by using 100% renewable energy to power its data centres. Activists from Greenpeace protested outside Twitter’s headquarters […] 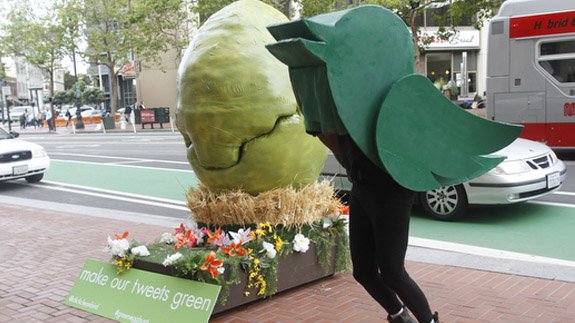 Twitter is being urged to follow in the footsteps of other internet giants by using 100% renewable energy to power its data centres.

Activists from Greenpeace protested outside Twitter’s headquarters in San Francisco this week as part of its campaign to pressure the company in “making our tweets green”.

Its latest report ‘Clicking Clean: How Companies are Creating the Green Internet’ claims that while major online companies such as Facebook, Google and Apple have committed to using green energy sources to power its data centres, Twitter has yet to do the same.

Apple became the first company to achieve its 100% renewable energy goal to power its iCloud and many data centres owned by Facebook also uses wind energy. Google is also using power purchase agreements for wind power to provide electricity for its services like Gmail and YouTube.

Gary Cook, Greenpeace Senior IT Analyst said: “Apple, Facebook and Google are powering our online lives with clean energy and building a greener offline world for everyone in the process. These companies have proven over the past 24 months that wind and solar energy are ready and waiting to power the internet and the rest of our economy, with clean electricity.”

Twitter spokesperson Christina Thiry reportedly said the company continues “to strive for even greater efficiency of operations” and welcomed “any constructive feedback that helps us get there”.